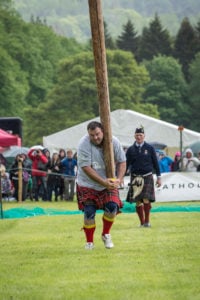 Caber Toss. AKA throwing a telephone pole as far as possible.

November 5, 2017 - This festive annual fall celebration is about all things Celtic, including music and dancing, sports and cuisine.

Various clans that originated in Scotland, Ireland, Wales, and Briton, are represented at dozens of booths offering such necessities as fine wool kilts at $350 a pop.

The various clans are well aware of their history and cultural heritage. The items for sale at the many booths were a reflection of that heritage. One of the more interesting items was a large, very detailed Celtic map with the location of each clan's original home.

Diversity
One observation. Most Tucson festivals attract people from highly diverse ethnic backgrounds. In fact, that is the very purpose of one of Tucson's most popular festival, Tucson Meet Yourself.

I know that when Ms. Karen & I attend traditional Hispanic festivals, the attendees are a broad mix of Tucson's general population, including Asians, Blacks, and Whites like me.

Of course, at a Celtic Festival, one would expect that the overwhelming number of attendees would have blonde hair/blue eyes or red hair/green eyes.

But in the couple of hours that Neighbor Roy & I were at this Celtic Festival, we saw only one Hispanic person, a lovely senorita on the arm of a tall blonde, blue-eyed Celt. We saw only one African American, a very large fellow who looked like he could have been entire front line of a professional football team.
It's just an observation, but I do wonder why. Do you know?

Pipes & Drums
Pipe and drum marching bands compete for honors. The sound of bagpipes was pervasive.

I noticed that Celtic men typically have very muscular, powerful calves and massive torsos. All the better to conquer rival clans and heave telephone poles the length of a football field. 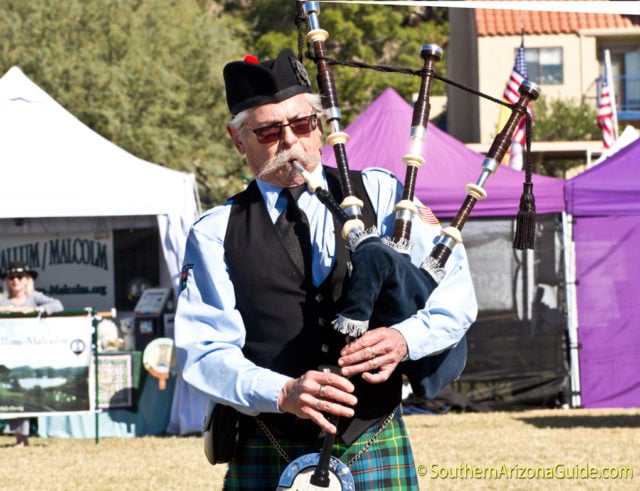 A Word About Celtic Cuisine

The two most popular Celtic foods served are (1) the Scottish sausage; and (2) haggis & mash. 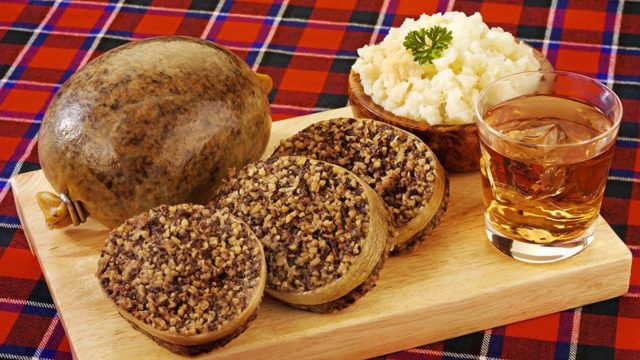 Neighbor Roy told me that his Scottish sausage was spicier than Polish sausage and the meat was leaner. As for haggis and mash, let me first make a suggestion.

Should you ever get the opportunity to order haggis and mash, do NOT inquire as to contents before you try it. I tried it and it was delicious.

SPOILER: Haggis is a traditionally Scottish dish that consists of the heart, liver, and lungs of a sheep or a calf minced with suet, onions, oatmeal, and seasonings and boiled in the stomach of the animal. YUMMY!

The “mash” is simple mashed potatoes and gravy … Celtic, American, or otherwise. A few swigs of Irish whisky or Scotch before the haggis adds immeasurably to the experience. 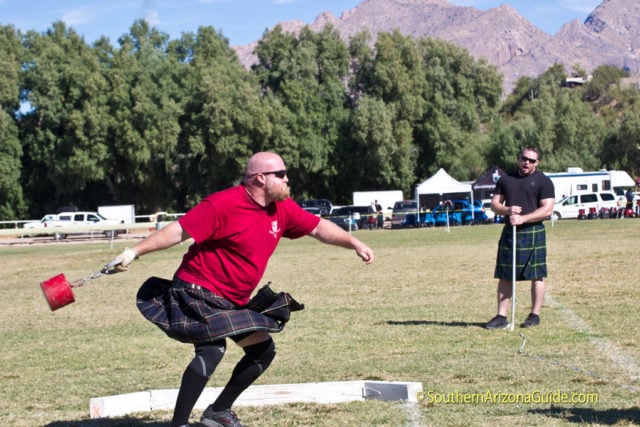 The object of this competition is simply to throw this heavy object as far as possible. I don't know how heavy it was, but I did note that, even as big and strong as these Celts are, said object seldom soared over 10 yards

Like most Tucson festivals, its underlying purpose is to raise money for worthy local charities. In the case of the Celtic Festival, their charity is “Youth On Their Own”, a dropout prevention program that supports the high school graduation and continued success of homeless, unaccompanied youth in Pima County.

We at Southern Arizona Guide applaud their efforts. See you next year!