If you have read our stories about the Camp Grant Massacre and the trial of those Tucson citizens accused of this mass murder, you might find this brief follow-up note of interest.

Following their acquittal, the leaders of the mob were rewarded with paying public positions. William Oury was elected city alderman; Sydney DeLong was elected mayor. Juan Elias, brother of Jesus Elias, was elected town dogcatcher. Given the huge number of stray dogs in and around Tucson in those days, dogcatcher was considered a very important job. All of these men and others, such as Sam Hughes, were honored with place and street names. 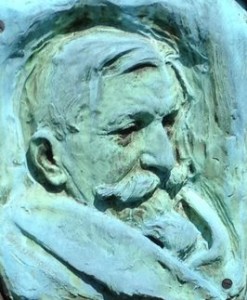 After the massacre, Lt. Royal Emerson Whitman (1833-1913), whose troops were responsible for the protection of the peaceful Aravaipa Apaches, was hated by the citizens of Tucson. There were several attempts to besmirch his reputation. He was court-marshaled on trumped up charges. Local newspapers – particularly John Wasson’s Arizona Citizen (est. 1870) – tried to implicate Whitman in the massacre he tried to stop. Even though various courts concluded that there were no merits to any of the charges, Whitman’s reputation was shot and his Army career ended in bitter retirement.

Chief Eskiminzin and his young daughter were two of the few survivors of the massacre. Following the murder of between 125 and 144 of his people, mostly women and children, the Chief tried to get along with Indian Agent John Clum and was partially responsible for the creation of the San Carlos Apache Indian Reservation.

In 1873, two years after the massacre, conditions on San Carlos were so poor, that Eskiminzin led his people off the reservation and into the mountains. When he was captured by the Army, he was put in chains and sent to the guardhouse where he languished for months. When Clum found out about his confinement, he ordered the Chief to be released. 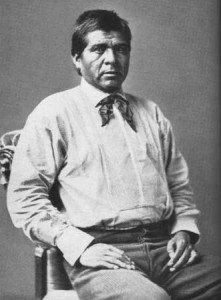 Chief Eskiminzin. His Apache name means “Angry Men Stand in Line for Him”

In 1876, Eskiminzin accompanied Clum to Washington, D.C. Along the way, he entertained Americans in a freakish Wild West Show orchestrated by Clum to pay for the journey.

Eskiminzin did not want to live on the reservation, however. He bought some farmland along the San Pedro River, which he irrigated. Eventually, his labors paid off and he became quite successful.

However, the Anglo and Mexican citizens of Tucson resented his success. Eventually, a mob forced him off his farm and back to the Reservation for protection (“where he belonged”).

In 1887, his son-in-law, known to history as “The Apache Kid”, was arrested for shooting two Apache scouts and Chief-Of-Scouts, Al Sieber. The “Kid” escaped to the mountains, but Chief Eskiminzin was arrested in May 1891on the charge that he might somehow aid his fugitive relative. Eskiminzin and 40 of his Aravaipa Apaches were exiled to Mt. Vernon, Alabama where the Chiricahua were prisoners of war.

Three years later, a white friend, Hugh Scott, convinced the authorities that the Chief should be allowed to return to San Carlos. He died there a year later, a bitter old man who is today revered by his people as a leader who always tried to do right by them, even in his own grief.

There is one more extraordinary event in the life of Eskiminzin that occurred a month after the April 30, 1871 massacre. He had a white friend, Charles McKinney, who was a rancher along the San Pedro River. The Chief visited his friend who invited him to stay for dinner. Afterward the two drank coffee and smoked a cigarette. Then Eskiminzin got up, pulled a revolver from his pants and shot McKinney dead.

Many years later, the Chief explained himself to an Army scout. “I did it to teach my people that there must be no friendship between them and the white men. Anyone can kill an enemy, but it takes a strong man to kill a friend.”