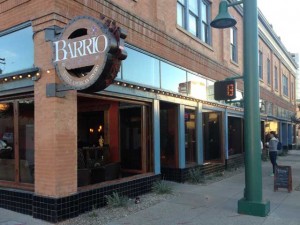 Revitalized Downtown Tucson has yet another "foreign" food niche restaurant. Of course there is Caffe’ Milano for very good Italian. It’s next door to the Fox Theater, so when we are attending a performance, we usually combine the two and do dinner and a show. It’s sorta like “A Night On Broadway” in NYC without the humungous price tag.

Miss Saigon is not new to Tucson, but is fairly new to Downtown. It’s on 6th Avenue half a block north of Congress. Very good Vietnamese. Penca serves good foods from Central Mexico, particularly Mexico City. It located on Broadway at Scott. 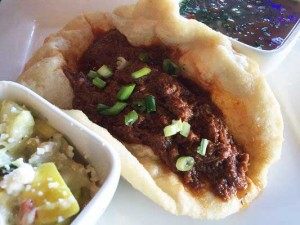 Now comes Barrio Cuisine. When I first heard the name, I assumed it was going to be just another Mexican restaurant because the word, “barrio” is Spanish for “neighborhood”. It turns out that Barrio Cuisine serves food native to our natives.
This unique and charming place has a lot of big windows so you can people-watch, a high open ceiling, and a large, square metal-topped bar with a fire pit almost in the center of the spacious main dining area. The wood tables and chairs look like they may have come from Mexico. However in talking with the hostess, Shanti, I found out they were bought from Tres Amigos, but were actually made in India by Indians. 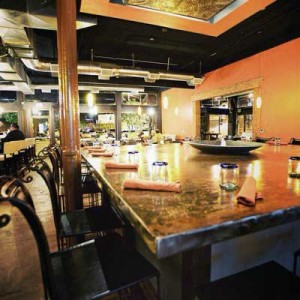 Shanti and her family are the owners. At some point, they realized that Downtown Tucson didn’t have a “Native American Bistro”, so they invented one. Barrio Cuisine combines the native and traditional foods of two groups who are descendants of the First Americans: the Pasqua Yaqui’ Tribe and Tohono O’odham Nation.

Shanti told me that she is Yaqui’. I know a little about the Yaqui’s because I am friends with Louis David Valenzuela, the Yaqui’ artist and woodcarver. Two years ago I photographically documented Louis carving a Deer Dance Mask from a piece of cottonwood. While he was carving he told me the story of his people; their history, traditions, and beliefs.

Yaquis call themselves “Yoeme”. Before the 1600’s when the Spanish came in contact with these native people, the Yaquis ranged widely through most of the American Southwest and Mexican Northwest and traded with many other native groups. They gathered wild desert foods, such as saguaro fruit and mesquite beans, farmed along the Rio Yaqui in Sonora where they cultivated squash, corn, and tepary beans. They hunted game with bows and arrows.

For 400 years, the Yaquis were in almost constant conflict with the Spanish, and later the Mexican governments. These governments never adopted the American policy of concentration camps euphemistically called “reservations”. The Spanish and later the Mexicans gave their native people 3 basic choices: assimilation (through inter-marriage); enslavement; or annihilation. Brave as the Yaqui warriors were, their bows & arrows were no match for the invaders' firearms. In the late 19th and early 20th century, many Yaquis fled north to the Tucson area were they now have their own tribal village and government. 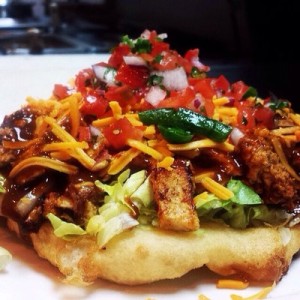 On this, my first visit to Barrio Cuisine, I met friend Jeff for lunch about 11:30 AM. The place was not yet busy so we had the opportunity to leisurely check the place out and make inquiries about the menu. 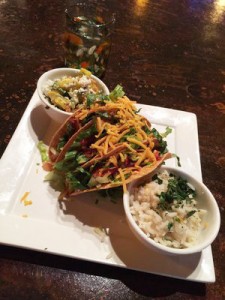 I also got a small sample of tepary beans. I knew that when the Spanish encountered the Tohono O’odham, they referred to them as Papago because an important staple of their diet was tepary beans. But I had never tasted any. I mentioned this to Shanti, who told me that Papago means “bean eater” and is considered derogatory. I actually knew this, but on the off chance you didn't, I mention it here so you will not offend the O’odham or otherwise embarrass yourself.

I thought the tepary beans were pretty bland and needed salt. However, there was no salt on any table, (seems to be a trend). Otherwise, my lunch was very good.

Both Jeff & I only had ice water, but a peak at their Wine/Beer/Cocktail choices tells me that next time I will be sampling from their “Bartenders Vision”.

Our server was attentive and the Barrio Cuisine staff is friendly and knowledgeable. The ambiance is somehow both rustic and modern … definitely unique and pleasant.

Do we recommend Barrio Cuisine to our friends & family?  We do. This is a particularly good place to bring visitors to Tucson. Here your out-of-town guests will likely get their first taste of authentically traditional Yaqui’ and Tohono O’odham dishes prepared with fresh ingredients and an ancient knowledge of how to survive and prosper in our Sonoran Desert.