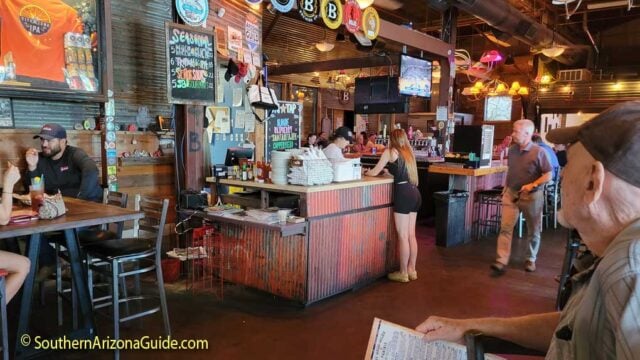 We arrived right at noon and the parking lot was packed. Had to park in the lot next door. That was probably not kosher, but …

We entered through the front door and the big room was just as packed as the parking lot. But we took a table nearest the door and were promptly served by our attentive waitress. Roy ordered his usual hot tea, but she told us they don’t serve hot tea. Well, I’ve known Roy long enough to know that that will cost them at least one saguaro in our ratings. 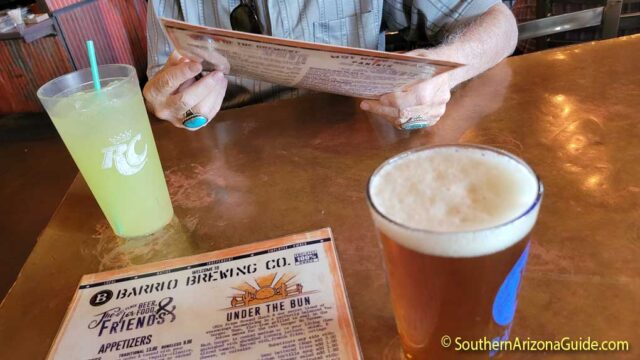 My IPA, Roy’s Lemonade, and our menus.

I ordered an IPA, made here, not India. This was Arizona’s oldest beer. It’s a “refreshing ale using clean & crisp Noble Saaz hops on a light malt profile”. This is southern Arizona’s best-selling craft beer.

When our drinks were served, our waitress took our lunch orders. Roy ordered a Philly Cheese Steak Sandwich ($11.00). 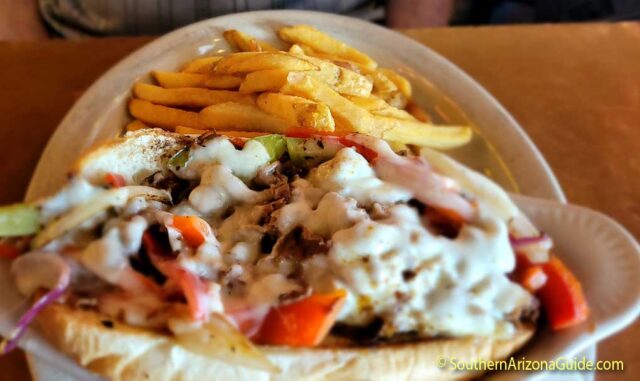 I’ll let Roy tell you about his experience.

“This week, Jim and I went to the Barrio Brewing Company. True to its location in the warehouse district south of downtown. The parking lot was full of pick-ups, more than a Jim Click parking lot (sorry, Jim–most of them were not Fords.) Inside is a cavernous, high-ceiling room, complete with macho styling decor, and loud western music. Our waitress was prompt, and took my drink order–no hot tea so I settled for lemonade. The menu was extensive and moderately priced. I ordered the Philly beef cheese steak with fries. As the restaurant was pretty full it did take a few minutes to arrive. When it arrived, I noticed that it was beef–not cuts, but hamburger. The bun was excellent, there were sliced tomatoes, onions, and peppers with a generous amount of cheese on top. Since it was only $11.00 I didn’t mention it. For the size, contents, and price, it was a deal–try getting a hamburger in downtown for only $11.00. 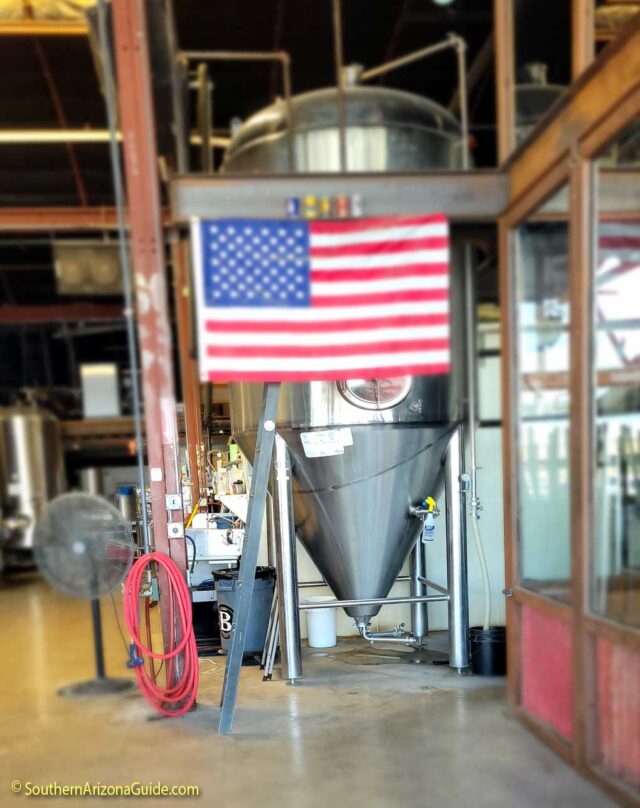 As we were leaving, we noticed an open door, into what was the brewery section–they really do brew their own beers but will let Jim tell you about that. The Barrio Brewing Company lives up to its reputation–generous portions, clean, if somewhat noisy, appropriate decor, and tasty and plentiful food–it does deserve 4 saguaros for the combination–despite not having tea, too sissy for the macho crowd, I guess.”

I was surprised Roy gave them 4-Saguaros in spite of the fact they don’t serve hot tea. Must have been an exceptionally good sandwich, half of which he took home to eat another day. Either that or he was just in a good mood.

Barrio Brewery produces 13 different beers, from the Tucson Blonde Ale that I had, to their Mocha Java Stout with “locally-roasted espresso beans, unsweetened cocoa, and rolled oats that make for an extremely complex ale with a creamy smooth finish”. I’ll have to try it sometime. Beer is available it ToGo 6-packs and Growlers. 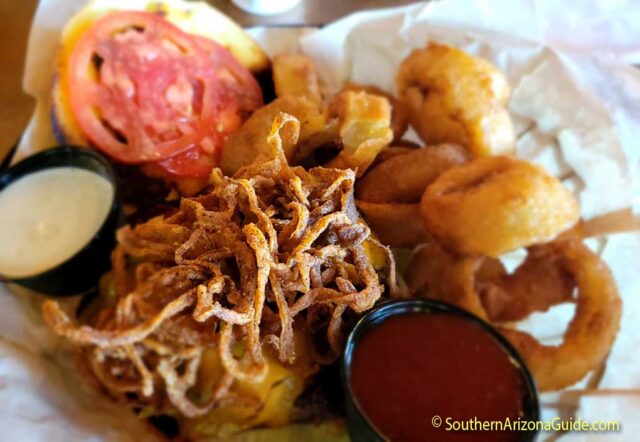 My Western Burger was really good, and cooked medium to my liking. The onion rings were also very good. Their BBQ Sauce and Ranch Dressing were superb.
I’d rate Barrio Brewery’s burgers in our Top Ten Burgers in Tucson list.
So, I rate Barrio Brewery with four Saguaros too. Very good, indeed. Just loud. But then what restaurant isn’t these days?