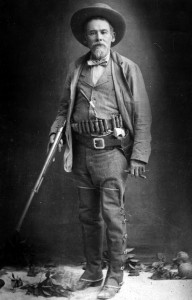 “Texas” John Slaughter was the sheriff who cleaned up Cochise County after the Earp Brothers and Doc Holliday left Arizona. He was as tough as they come and, among the outlaw class, earned the moniker “that wicked little gringo”.

As despised and feared as he was by the outlaws, he was highly respected and much appreciated by the law-abiding ranchers, merchants, and miners.

In 1896, ten years after Geronimo’s final surrender, some disgruntled Apaches left the San Carlos Reservation and returned to a nomadic life of raiding both American and Mexican ranches.

The Apaches Attack And Kill A Little Girl And Her Father

“While traveling by team and wagon from Pima, Arizona to Clifton, Arizona [Horatio Merril, age 58 and his daughter Eliza, age 4] were ambushed and killed by Indians with rifles December 3, 1895, shortly after sundown.” So reads a roadside marker on State Route 70 east of Safford.
Eliza was wearing a distinctive white dress, or basque, tight at the waist, shaped by darts and many buttons down the front. The Apaches took the dress and other Merril possessions, including a fringed brown wool shawl.
A few years after the Merril murders, rancher Alfred Hand was slaughtered by Apaches who stole whatever they could carry from his cabin near Cave Creek in the San Simon Valley, including a cloth Cochise County election poster made of white muslin with the names of Republican candidates in the election of 1888.
Read More

The Slaughter Ranch and Renegade Apaches

John Slaughter had one of the largest cattle operations in Arizona Territory at his San Bernardino Ranch 45 miles east of Bisbee on the International Border. Much of the Slaughter Ranch was in Mexico. He was used to Mexican outlaws trying to steal his cattle and most paid for their misdeeds with their lives. But Apaches stealing Mr. Slaughter’s cattle was another matter, and the former sheriff would need the assistance of the U.S. Army.

In early May, 1896, ranch foreman, Jesse Fisher, notified his boss that Apaches were camped in the Guadalupe Mountains south of the border. Horse soldiers, Army scouts, and ranch hands, perhaps 40 men in all, discovered the Apache’s camp, but it was deserted. Scouts tracked the small Apache band to a new camp about 20 miles away. They attempted to sneak up on the Indians under cover of darkness, but were discovered. Some shots were fired, but the Apaches knew they were badly outnumbered. As was their practice, they just disappeared into the wilderness where the White Eyes couldn’t follow.

When the soldiers and ranchers entered the Apache’s camp, they found supplies of meat, corn, and mesquite beans. They also found stashes of plunder stolen from Americans and Mexicans: hatchets, scissors, needles and thread, black powder and reloading equipment and more. Here too they found a few Indian ponies, and 9 horses, four of which belonged to Mr. Slaughter. 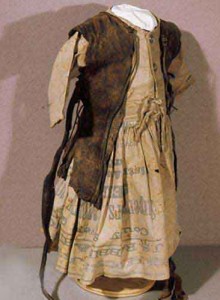 This is the dress and vest Apache May wore when Sheriff John Slaughter discovered her.

In one of the wickiups, John Slaughter found an infant, a girl perhaps a year old. He wrapped her in a brown, wool shawl he found nearby and took her back to his ranch.

It was not long before they realized that the child’s shirt had been constructed from the dress of Eliza Merril. The brown shawl had also been Eliza’s.

Moreover, the infant’s dress was made from the cloth election poster the Apache’s had stolen after they murdered Mr. Hand.

John and his wife, Viola, named the child Apache May … “May” for the month in which they found her. Another young foster child on the ranch named Lola started calling her ’Pache, which quickly became “Patchy’.

Viola dressed “Patchy” in bright colored dresses, kept her reasonably clean and groomed, and began teaching her the ways of a successful 19th century American rancher, including table manners.

It is not unheard of for 19th century hunters to kill wolves or other predators, and take home one or two of their orphans to see if they could domesticate them. A lot of people in Southeastern Arizona simply assumed that the Slaughters had done something similar.

To Mexican and American ranchers, miners, and merchants, the Apaches were vermin, albeit the most dangerous kind. They were a species not to be trifled with. Rather they were to be held in concentration camps known as reservations or eradicated. When we understand such attitudes, we can more easily see why Apache May became a minor celebrity in and around Tombstone and Bisbee. 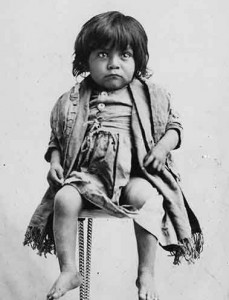 This is the dress and vest Apache May wore when Sheriff John Slaughter discovered her.

Would this prosperous and prominent Cochise County family be able to domesticate a wild Indian? Or would Apache May revert to the villainous and amoral wild state of her people. In other words, “You can take an Indian out of the wild, but you can’t take the wild out of an Indian.” Such were the prevailing attitudes.

It was in this world that young Apache May became a “media star”. The Slaughters took the girl to Tombstone on numerous occasions so the people could see her. The now-famous Old West photographer, C. S. Fly, took pictures of her that were then circulated to the newspapers.

Apache May Story In Tombstone Epitaph

On June 17, 1896, the Tombstone Epitaph published a lengthy story about the Slaughters and their young Apache.

“Mrs. J.H. Slaughter and her charming daughter, Miss Addie arrived in town today with the little Apache papoose from the San Bernardino Ranch.”

“As soon as it became known that the papoose was in town, a steady stream of people visited Fly’s Gallery to catch a glimpse of the young captive.”

“Isn’t she cute,” said each of the ladies in their turn as the youngster sat mutely but calmly, munching on some cake.” 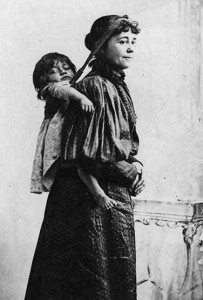 Viola Slaughter attempting to carry Apache May as an Indian mother would.

“Her features were covered with a most propitious smile and she seemed tickled to death, which in turn, was contagious to the ladies present.”

“The papoose is a chubby girl of about two or three years of age, with a good head of coarse, black hair, huge beautiful eyes, and for her size, is strong and healthy, and a complexion color which distinguishes an Apache. The little papoose in her neat, red dress, clean face and parted hair makes her look indeed “cute”!”

“Mrs. Slaughter, who has inquired into the matter, and finding its mother has not returned to the reservation, has decided to adopt and raise the papoose. The entire family has become quite attached to the young captive, and if she takes kindly to civilized life will no doubt receive a liberal education, and be brought up in the way it should go. Mrs. Slaughter states ‘Apache’ as she has already been christened, takes kindly to her surroundings, and has become the pet of the San Bernardino Ranch.”

Apache May and Don Juan

Of all the people at the ranch who doted on Apache May, it was clear to all that her favorite was John Slaughter. The attachment was mutual. She called him Don Juan and followed him around the ranch whenever she could. When he was gone from the ranch, ‘Patchy’ would sit on the porch for hours awaiting his return. She was happiest when she was riding on horseback with Don Juan. 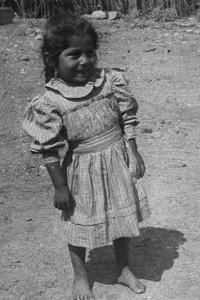 Patchy about age 4 seen here on the Slaughter Ranch.

On a cold February morning in 1900, some of the ranch children, including Patchy, were playing around a fire that had been started in the yard to boil water. Suddenly, Patchy’s dress caught on fire. The terrified youngster ran away from the ranch house. Willie Slaughter, adult son of John by a previous marriage, heard her screams, and ran after the girl. But by the time Willie was able to smother the flames, Patchy had severe burns over much of her little body.

The Slaughter ranch house and out-buildings are about 18 miles east of the City of Douglas. But in 1900, Douglas didn’t exist. The closest doctor was in Bisbee, 45 miles away. Fortunately, the ranch had a telephone line to Bisbee and Dr. Dudley was called immediately.

He gave first aid instructions over the telephone, then headed for the ranch. But in his horse and buggy, it took him over 8 hours before he could personally attend to the little girl.

Patchy suffered horribly. At one point she told Mr. Slaughter, “Don Juan, I’m going to die.” When Dr. Dudley arrived, he assessed the situation. By then the girl was in shock and her vital signs were very weak.

He told John and Viola that there was no hope. Apache May died the next morning. The Slaughters were devastated.

Jesse, the ranch foreman, fashioned a small coffin of rough lumber and lined it with cloth. She was buried in the ranch cemetery. 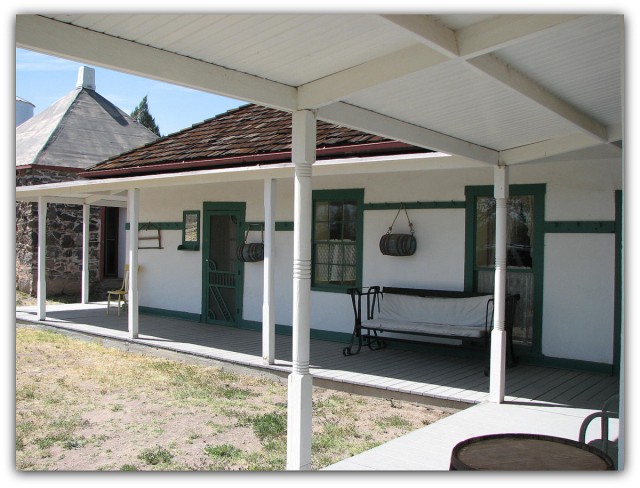 Today, you can visit “Texas” John Slaughter’s San Bernardino Ranch and we recommend you do. It is a fitting museum to the man and his family who did so much to civilize Southeastern Arizona. You can read Roger Naylor’s “Texas” John Slaughter: Arizona’s Meanest Little Good Guy on this website. 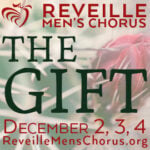