As you head north on FS 687, the western side of Cochise Stronghold stands imposingly on your right. Imagine that, in 1869, you are a member of the U.S. Cavalry stationed at Fort Bowie. A band of Chiricahua Apaches, perhaps 30 well-armed warriors, had that morning raided a nearby ranch, killed the rancher, his wife, and two ranch hands, and took two young children captive. Your company has chased the renegades to this place and the Indians have disappeared among the boulders. Question: would you dare continue the pursuit?

My answer: Only if you have a death wish. They call it Cochise Stronghold because it was virtually impregnable with 19th century technology, a fact you can now go and see for yourself. 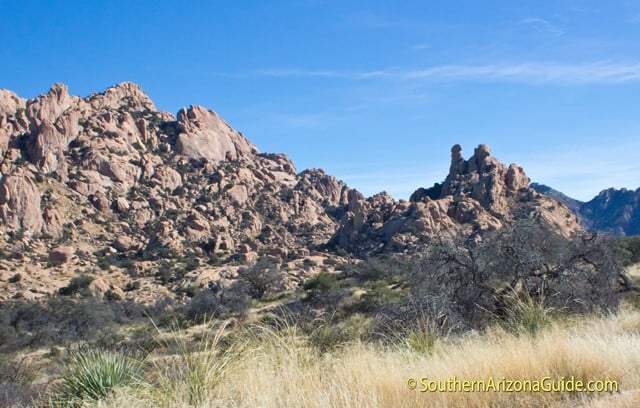 West Side of Cochise Stronghold

Southern Arizona is peppered with places of major historical importance. Many are, in one way or another, related to the Apache Wars that raged throughout Southern Arizona from 1861 to 1886. In terms of historical significance, I can’t think of any place more important than Council Rocks, the most likely spot where General Oliver Howard and the great Chiricahua Apache chief, Cochise, negotiated a peace accord in 1872.

Knowing that to get to Council Rocks near the western entrance to Cochise Stronghold we would need a high-clearance vehicle, we acquired the services of a local jeep tour operator, “Into The West” (NOT recommended), and left from Tombstone at 10:45am on a gorgeous Monday morning. About 45 minutes later, we parked at the base of Council Rocks and began our ascent. 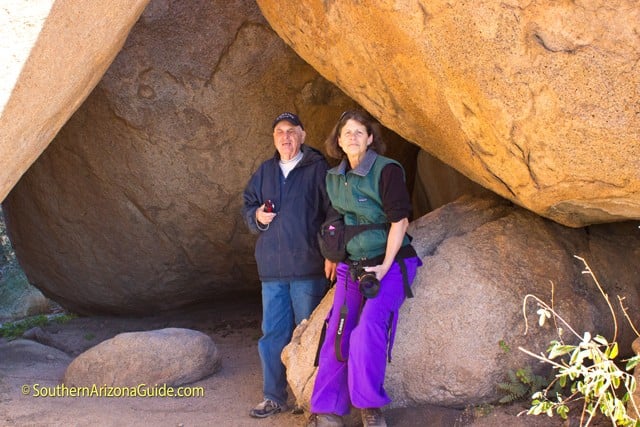 Neighbor Roy & Ms. Karen at Council Rocks; late December 2014. This place would have made an ideal shelter for Cochise and his people. From here, Apache lookouts could see approaching soldiers many hours before they could be in position to attack the Indians. 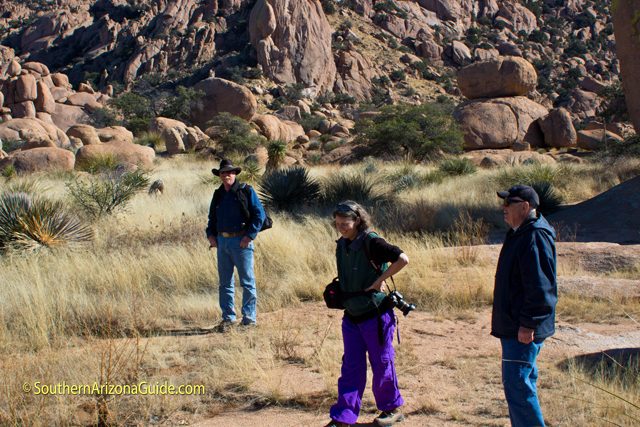 KC, Ms. Karen, & Neighbor Roy explore Council Rocks. This grassy open area would have been ideal for the large gathering of Chiricahua Apaches who attended the peace conference. Cochise was a leader, not a dictator. To agree to the terms of peace, the Chief needed his senior warriors to buy in to the plan. Yet, Cochise fairly dictated the terms to General Howard and got everything he wanted for the long-term benefit of his people. (1) An end to hostilities, (2) A huge reservation where no White Men or soldiers could come uninvited. (3) His best friend, Tom Jeffords, as Indian Agent. (4) Rations and trade agreements. 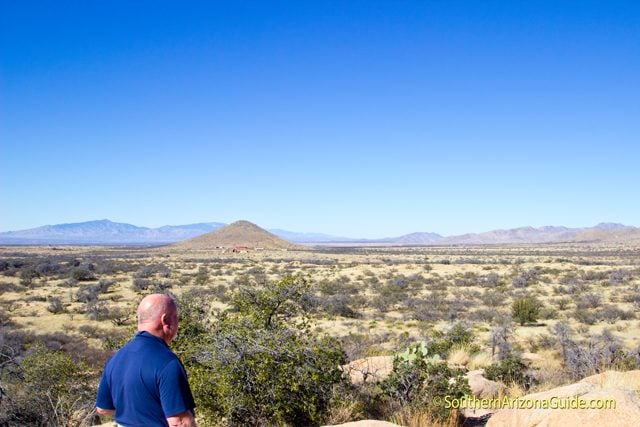 In the distance is the little hill some call Knob Hill and other call Treaty Hill. Once Cochise and General Howard formally concluded their Peace Accord with a solemn ceremony, the Chief sent his warriors to the top of this hill where they planted a flagpole with a large white flag signifying to all that the Chiricahua Apaches were now at peace with the Americans. It would only be a few years before the Americans broke their promise, cancelled the reservation, and drove the Chiricahuas to the dreaded San Carlos Apache Reservation, thus unnecessarily prolonging the Apache Wars for another decade.

Note: a 4-wheel drive is not required, weather cooperating, but a high-clearance vehicle is highly recommended.

We headed north out of Tombstone on Hwy 80 for slightly less than 2 miles and turned right (east) onto the fairly rough, unpaved Middlemarch Road. After about 10 miles, we crossed a cattle guard and immediately turned left (north) onto Forest Service Road 687 (very small sign. If you continued straight you would see a sign that you are entering the Coronado National Forest.) This rocky, rutted road skirts the western edge of Cochise Stronghold in the Dragoon Mountains. After driving north approx. 6.5 miles we turned right onto FS 687K. You may not see the little road sign for 687K until just after you make the turn, so rely on your odometer. In about a quarter of a mile, the road ends at the trailhead (no signage). The hike up to Council Rocks is about a quarter mile and moderately steep. Watch out for rattlesnakes.

West Side of Cochise Stronghold in the Dragoon Mountain