↓
Home→a Newsletter→Adventures In Apache Country: An (1864) Tour Through Arizona by J. Ross Browne

In the 1850's, Southern Arizona was undeveloped. Tucson was a small, dirty Mexican village with perhaps 300 poor souls. The Spanish abandoned their Presidio at Tubac because of relentless Apache attacks and had established El Presidio de Tucson in 1775. The Mexicans had taken over the fort following Mexico's independence from Spain in 1821. Following the 1854 Gadsden Purchase, the United States Army raised the American flag over the fort in 1856 and the Mexican soldiers stationed at the Presidio left for Sonora ... no doubt happy to be relieved from this dismal assignment.

Hardy pioneers, such as Charles Poston (aka the Father of Arizona), envisioned fortunes to be made south of Tucson in the Santa Rita Mountains and the hills of Patagonia and Arivaca.  But successful mining depended on getting heavy machinery to the mines. That turned out to be no small feat, as described by J. Ross Browne in his 1864 book, Adventures in the Apache country; a tour through Arizona.

Browne traveled through Tucson in early 1864 and recounts his observations of Tucson and Southern Arizona. He was a fine observer, a successful writer and illustrator.
Below are excerpts from his book about Arizona and Tucson.

(Successful mining) depended on transporting and erecting machinery and developing the silver mines south of Tucson; but in consequence of the inaccessible nature of the country, and the high rates of duties levied upon all importations through Sonora, these enterprises were carried on at great expense and under extraordinary difficulties. Boilers weighing six thousand pounds and heavy engines had to be transported in wagons from Lavaca in Texas to the Rio Grande, and thence across the continent to the silver regions—a distance of twelve hundred miles.

Tucson Arizona Territory ca. 1864. Note the flag over the Presidio and crops and orchards along the banks of Rio Santa Cruz in the foreground. Sketch by J. Ross Browne.

The Road To Tucson

The roads were almost as nature had made them —rough and rocky, abounding in ruts and pitfalls and heavy sands, and every mile of the way from the Rio Grande was beset with dangers. Fierce and barbarous Indians lurked behind the rocks and in the deep arroyas, ever on the alert to plunder and murder the little bands of white men who toiled wearily through the inhospitable deserts.

The sufferings of these hardy adventurers were almost without a parallel in the history of human enterprise. Hunger and thirst and burning suns and chilling nights were among the least of the trials to which they were subject ; sudden death from hidden foes, or cruel and prolonged torture, stared them in the face at every step. The wayside was lined with the bleached bones of unfortunate men who had preceded them, straggling parties who had fallen victims to the various perils of the journey.

The Economic Impact of the Wild Apaches

When, after weary months of toil and suffering, the jaded teamsters arrived in Arizona with their precious freight —now literally worth its weight in silver—they found no established homes, no prosperous communities of families to greet them, but a country as wild as that through which they had passed, almost desolated by the ravages of Apaches. For three centuries these Bedouins of the desert had continued their depredations upon stock, robbing the ranches, killing the rancheros, and harassing emigrant parties.

No industry could prosper under their malign influence. The whole State of Sonora was devastated, and the inhabitants in a starving condition. Arizona possessed at least the pretense of military protection. It soon became infested with the refuse population of Sonora—the most faithless and abandoned race, perhaps, on the face of the earth.

What the Apaches left undone in the way of murder and robbery they (Mexicans) seldom failed to complete, and indeed were regarded with more distrust by respectable citizens than even the barbarous Indians.

Nor was this all. The most desperate class of renegades from Texas and California found Arizona a safe asylum from arrest under the laws. The Vigilance Committee of San . Francisco did more to populate the new Territory than the silver mines. Tucson became the head-quarters of vice, dissipation, and crime. It was probably the nearest approach to Pandemonium on the North American Continent. Murderers, thieves, cut throats, and gamblers formed the mass of the population. Every man went armed to the teeth, and scenes of bloodshed were of every-day occurrence in the public streets.

There was neither government, law, nor military protection. The garrison at Tucson confined itself to its legitimate business of getting drunk or doing nothing. Arizona was perhaps the only part of the world under the protecting aegis of a civilized government in which every man administered justice to suit himself, and where all assumed the right to gratify the basest passions of their nature without restraint. It was literally a paradise of devils. Under such circumstances it is not a matter of surprise that the progress of the country was slow. It was not a place for honest working-men or for families. Good people feared to go there. The newspapers were filled with accounts of bloody affrays, robberies, and Apache raids.

Tucson is a city realizing, to some extent, my impressions of what Sodom and Gomorrah must have been before they were destroyed by the vengeance of the Lord. It is gratifying to find that travel in many lands has not yet fatally impaired my capacity for receiving new sensations. Virginia City came near it ; but it was reserved for the city of Tucson to prove that the world is not yet exhausted of its wonders. 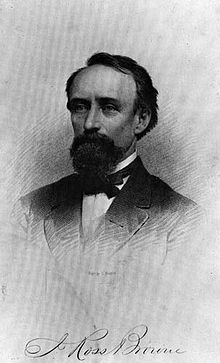 Passing the Point of the Mountain, eighteen miles below, (the traveler) is refreshed during the remainder of the way by scraggy thickets of mesquite, bunches of sage and grease-wood, beds of sand and thorny cactus ; from which he emerges to find himself on the verge of the most wonderful scatteration of human habitations his eye ever beheld—a city of mud-boxes, dingy and dilapidated, cracked and baked into a composite of dust and filth; littered about with broken corrals, sheds, bake-ovens, carcasses of dead animals, and broken pottery ; barren of verdure, parched, naked, and grimly desolate in the glare of a southern sun. Adobe walls without whitewash inside or out, hard earth-floors, baked and dried Mexicans, sore-backed burros, coyote dogs, and terra-cotta children; soldiers, teamsters, and honest miners lounging about the mescal-shops, soaked with the fiery poison ; a noisy band of Sonoranian buffoons, dressed in theatrical costume, cutting their antics in the public places to the most diabolical diri of fiddles and guitars ever heard ; a long train of Government wagons preparing to start for Fort Yuma or the Rio Grande — these are what- the traveler sees, and a great many things more, but in vain he looks for a hotel or lodging-house.

If you are interested in the full book by J. Ross Brown, you can find it here: Adventures in the Apache country; a tour through Arizona.

Success on Any Stage Workshop