Below is a map and legend of the Famous Vendetta Ride of Wyatt Earp and company. 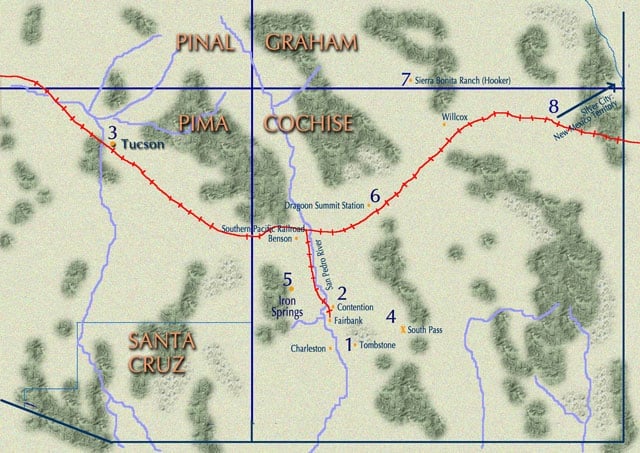 1. TOMBSTONE: Virgil Earp is wounded on December 28, 1881, and Morgan Earp is killed on March 18, 1882; the two events that trigger Wyatt Earp's search for vengeance. Warren Earp will not be killed until July, 1900 in Willcox.

2. CONTENTION: On March 19 Morgan Earp's coffin is brought to this town, with James Earp to accompany the remains to Colton, CA.There is not much left of Contention today, but the Friends of the San Pedro River, offer tours from time to time

3. TUCSON: After dining at the nearby Porters Hotel on the evening or March 20, the Earp party returns to the railroad depot and spots Frank Stillwell and Ike Clanton lying in wait on flat cars with weapons pointed at the "Earp" train. Well known sprinter, Ike, escapes. Frank does not.

4. PETE SPENCE'S WOOD-CUTTING CAMP: Wyatt Earp and his Vendetta posse ride to South Pass on the morning of March 22, looking for Spence. He isn't there, but they find the unfortunate Florentino Cruz. Spence surrendered, likely for his own safety in Tombstone.

5. IRON SPRINGS: On the warm afternoon of March 24, Wyatt Earp and his men ride here for refreshment and to meet their fellow posseman Charlie Smith. Instead, they find, perhaps their greatest quarry, Curly Bill Brocius.

6. DRAGOON SUMMIT STATION: The Earp posse stops an eastbound train at 1 pm on March 26 and hunts through the carriages perhaps looking for Ike Clanton without success.

7. SIERRA BONITA RANCH: Earp and his possemen arrive here on March 27 and receive food and shelter from influential cattle rancher Henry Clay Hooker. Not long after Wyatt's party leaves, Sheriff John Behan and his posse show up, only to be refused assistance.

8. SILVER CITY, NEW MEXICO TERRITORY: In early April the Vendetta ride over, Wyatt Earp and his men leave Arizona Territory and come here to sell their horses and saddles.