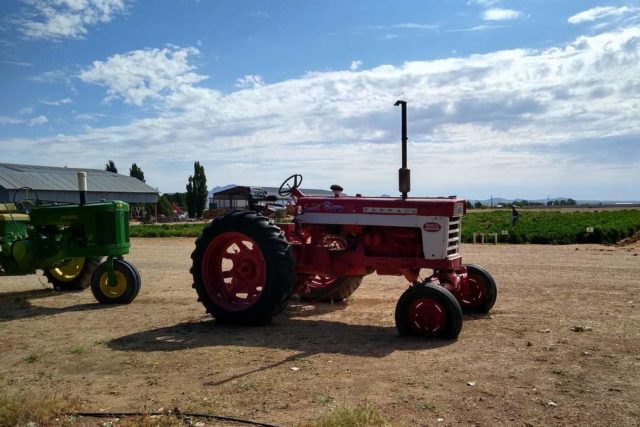 Friends of ours recently traveled to Apple Annie’s in Willcox for some fruits and veggies for canning. I am ever fond of Elaine’s Bread and Butter Pickles.

I grew up in a small farming town in northern Utah and, once we moved to Tucson, found myself missing the pick-it-yourself produce that was so readily available. Luckily, the produce growing areas in Cochise County are not far away, and a handful of farms offer “you-pick” produce at very reasonable prices. Armed with this knowledge, we set out to Apple Annie’s You-Pick Produce just northwest of Willcox in search of tomatoes and cucumbers for canning. The drive from our home to the fields was an easy 1.5 hours on I-10.

Apple Annie’s offers two you-pick areas, one for tree fruit and one for garden produce. Ripening dates may vary depending on the temperatures and rainfall, so check the website before you leave and if you plan to pick a large amount, call before you go to make sure the produce you want is really “on” in the quantities you need.

The produce fields have a large variety of vegetables. The day we were there, it was possible to pick tomatoes, cucumbers, okra, summer squash and bell peppers. I was after a boxful (20-30 pounds) of tomatoes and a smaller boxful (about 9 – 10 pounds) of pickling cucumbers. We opted for “pink” tomatoes rather than dark red because they would transport easily without turning into a goopy mush, and would also give me a few days before I needed to can them. The cucumbers were processed into bread and butter pickles the next day, using my mother’s recipe, which I believe she got from her mother. Although we planned to spend the entire day on our trip, we were only gone a total of 4.5 hours: 3 for driving and 1.5 for picking. As we checked out, we also bought a half dozen ears of their (already picked) sweet corn – it was delicious. 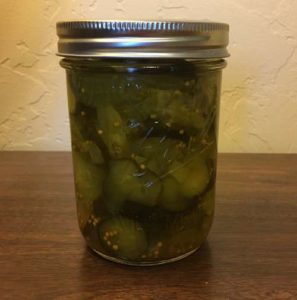 This recipe uses a boiling water bath for processing (known in older days as a “cold pack canner”).

4.5 – 5 pounds pickling cucumbers, washed well and sliced into thin rounds (leave the skins on)
2 – 3 large sweet onions, peeled, quartered and sliced into thin slices
A generous amount – maybe 1/4 cup – non-iodized salt such as kosher salt
Combine the above in a large bowl, stir well, cover with ice and let it sit at room temperature for about 4 hours. Drain well.

Combine in a large stockpot:
5 cups white sugar
5 cups white vinegar
2 T mustard seed
1 t celery seed
1.5 t ground turmeric
Stir well, then stir in the cucumber/onion mixture. Bring to a boil and cook 5 to 10 minutes or until cucumbers are no longer bright green on the edges.

Pack the pickles into sterilized pint jars and add the hot vinegar mixture to top off each jar, leaving ½” of space below the rim. Wipe off the rims to ensure a good seal, cover with lids and rings, tighten and process the jars in a boiling water bath for 10 minutes*. Remove from water and allow to cool. Test the seal by pressing on the center of each lid; it should not “give”. Refrigerate any jars that don’t seal.

You can double or even triple this recipe, but may find it easier to process the pickles in individual batches.

*For elevations above 3,000 feet, increase the processing time by 5 minutes for each 500 feet in elevation.